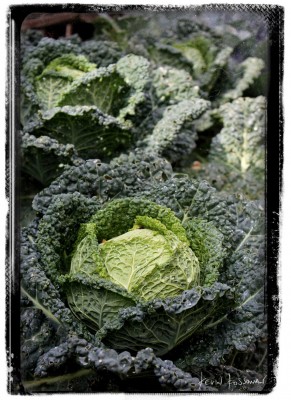 As I’ve watched and listened to fellow local gardening folks, I’ve been a bit surprised at how early in the season folks are packing it in. It’s made me consider my own rhythm, and I realized a few things. Mid-September usually is the end of the summer crops – the tomatoes, squash, beans, and anything else that’s sensitive to frost. This year, frost hasn’t reared its head here in the city yet. Summer’s still on like donky kong. The turning point for me is frost, as for many others, but that far from heralds the end of the season, but instead the beginning of the shoulder season – the fall garden.

The fall garden is an abundant one. Sure the tomatoes, basil, squash, and finicky plants go to mush at first freeze, but I seem to have an arsenal of frost hardy, even frost loving veg. It seems to be the majority. Brassicas don’t mind frost, some love it. Some are even hardcore, like kale, happy to freeze solid, or take a foot of snow. So brocooli shoots, red cabbage, savoy cabbage, tuscan kale, red russian kale, collards, rutabagas, and brussel sprouts aren’t going anywhere any time soon. Most other root veg don’t care about frost either – so my multitude of varieties of carrots, parsnips, beets, potatoes, and so on will be fine for a good while. And although the allium like onions and garlic are harvested and ready to be planted again, the leeks stand like an army of awesomness to be reckoned with, and will well into the deep freeze.

So frost is only the end of the summer garden. The fall garden is just as exciting for different reasons, and extremely prolific and productive. Last year my final harvest from the garden was mid-November, without cold frame protection. This year I have baby peas, spinach, arugula, kale, and carrots growing now. And I have protection ready for them when the cold whallops upside the head arrive. But that time is not now, not yet.

9 Comments on “The Fall Garden Cometh”