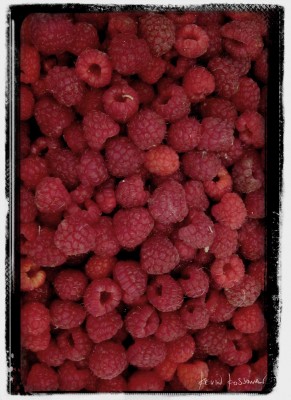 I had to add a ‘category’ for raspberries, as apparently, after 600+ posts, I’ve never written about them. That’s odd.

Yesterday was a bit of raspberry hell. I had agreed to pick a raspberry patch. Sweet. It was going to yield a lot. Great. I could use lots of raspberries as my kids love it. But what I didn’t know is that it takes about 1 hr to pick a 4L pail of berries, and this patch had been yielding roughly 7 4L pails every few days. That’s a whopping 7 hours + of raspberry picking. Not fun. I picked about 25 lbs – imagine a 5 gal pail full or so – and had to call it quits. I proceeded to enjoy much beer.

What many hours in a berry patch allowed me to consider was the productivity of such a small area – maybe 40′ long by 10′ wide, for a ball-park. Raspberries do not fruit once, give you a pile of fruit, and stop. They are relentless. I picked my first round in the morning, and swear by the evening pick some of the spots I had already tackled had new ripe berries. Every few days for many weeks, they crank out the produce. This past week, that patch has produced about 50L of fruit. That’s a lot of fruit. Think 50 quart jars full of berries. Every week. As far as yard fruit goes in the non-tree realm, they’ve got to be up there for most productive.

11 Comments on “The Humble Raspberry”