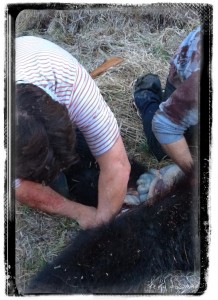 When we started to take a look at the 2014 production schedule of From The Wild, it was clear that there were going to be some epic memories captured on camera. One of those was the haul-out of the black bear in crotch-deep water, then walking a mile or two in sloshing boots and soaked jeans with a bear carcass soaking the guys in blood. What I didn’t expect as an outcome of the project is the crazy, hard to believe true stories that simply wouldn’t or couldn’t make the episode edit for a variety of reasons – in the case of the bear haul-out, it was far crazier than shown in the edit, but I had to tame down the gore if we were going to have any chance at a broadcaster touching it. So that’s one memory left out of the edit – the intense gore associated with the project. We’re constantly debating the merits of sanitization of food content.

Another is the simple lack of time to spell everything out – an example being the bear skull below that did appear in the final shot. It’s the actual skull from the sow harvested in the episode. We’d taken a few days between the hunt and the post interviews, and in that time Trevor had boiled, peroxided, and painstakingly cleaned the skull – including gluing in any teeth that had fallen out during the process. No small task. I’m still impressed. Didn’t have time to mention the context of the skull in the show though.

Also didn’t have time to mention what’s happening in the photo top left. I laughed. We were prepared, and well equipped, with all field dressing gear in my vehicle. Except that evening we’d hopped into Jeff’s vehicle as it was far more capable in the mud holes we were going to need to get through in the area we wanted to check out. When it came time to gut the bear: no field dressing knives. Trevor happened to have a couple crappy pocket knives he’d been handed by a relative earlier in the week – still in his pocket. So the boys got to it with horribly qualified tools. These are two pro butchers who, side by side, kill and gut a dozen or two animals every week at work, struggling to gain every inch through the hide. Then Jeff says ‘no problem, I’ve had to gut an animal with my Durango key before’. Dodge Durango. Couldn’t believe it. #superhero

Worst of all though, is having to omit ‘that which might be misunderstood‘. This episode has an intense story attached to it that one day may make ‘Part 2’. Maybe.

My takeaway: for all the epic adventure we can capture and show on camera, there will always be so much more to the story. It’s a piece of the legacy of the series that’s becoming dear to me – an unexpected treasure.