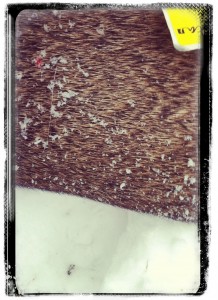 So apparently fate would have it that last year’s season of harvesting zero big game was to be juxtaposed with 2013’s crazy successful season. First morning out deer hunting, I filled my general whitetail tag. Bought supplemental doe tags because I didn’t think I’d actually shoot my elk. Being as it may that hunting is the new golf for business meetings, and butcher and friend Jeff Senger and I were overdue meeting re: a business we’re about to roll out – the obvious choice of venue for such a meeting was clearly a deer hunt. By late morning, we were loading up a whitetail. I’m used to shooting a calf moose every year, and that’s the end of the season. So this 3 animals in 4 days thing is both new, exciting, and a whole lot of fun, especially given the company I was keeping.

As an aside, Jeff is a gutting ninja. He slaughters animals for a living, so by the time I went to the truck to get my knives 50 yards away and back, he had the animal tagged, gutted, and dealt with. Gutting ninja.

I’ve been asked a few times already what I’m going to do with all the meat. The reality is that when you hunt with friends, the meat gets shared amongst families. So I don’t have a singular whole big game animal in my freezer, all of them having been shared. I still have lots though, much of it being made into delicious smoked sausages, and lots of elk and deer will be on the menu at my home until next hunting season. Big game season is now over. Time to start looking at seed catalogs.