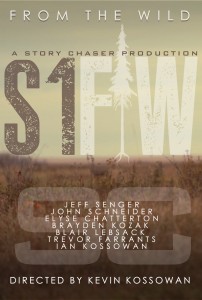 We made it. Season One of FROM THE WILD was a roller coaster to be involved with and produce – the insanely fun, adrenaline-filled, addictive kind that means Season Two is already in preproduction, with some exciting tweaks and improvements on deck.

I will never be able to say enough about the folks that are tuning in via pay-per-view. You’re what allows this project to continue. Early on in season one, we’d decided firmly against going with a TV broadcaster if one should come knocking. We felt that the edgier content we’d want to show, like has been done historically on this site, simply isn’t ‘allowed’ by broadcast corporations and sponsors. Then the TV interest came, a handful of channels and distributors. It was exciting and flattering to contemplate, but not surprisingly, because we decided to stick to values and show some not-TV-appropriate-material [see episode 6], we’ve secured our fate that it will be the viewers that will be our enablers, not a conventional media distribution middle man. What does this mean? Means we don’t have to do shameless plugs of sponsors. Means no ads. It means we can produce whatever inspires us without a filter. It means it’s pretty much the most exciting project of our lives, and we have you to thank for it. Thank you.

The success of this project has also birthed a sister project that will be announced in summer of 2015 once it’s in production.

For the time being, full episodes will remain available at www.vimeo.com/ondemand/fromthewild, but we’re working on having the videos available directly on this site.