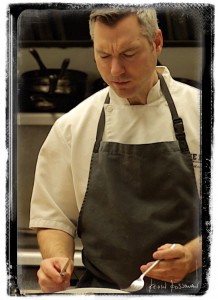 This episode was a turning point for me and this series. After quite a few months of talking to TV channels and an american distributor, and concluding that conventional television distribution wasn’t a good fit for this particular project, I finally got shooting to the kind of content I wanted to show – field dressing, harvesting of offal, skinning – things TV won’t or can’t show, basically. I get it, they have their reasons. But from day one, my gig hasn’t been about sanitizing the realities of how we obtain our food. Seemed to go against my values to start now.

This episode is one that I hope will shift the wild food culture in Canada, even if only a minute amount, and even if only after many years. I’d love for black bears to be seen as the choice food they can be, and not just hides and rugs. Much of the episode is Chef Blair Lebsack of RGE RD working with black bear, the prize being the copious fall black bear fat. We knew from the onset that we wanted to make black bear pastry with the bear fat instead of lard or butter. So he did. And it was awesome.