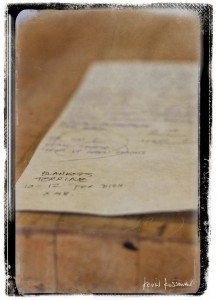 On a recent [amazing] trip down to the Slow Food Canada national meeting, I happened to end up in a restaurant for dinner in Penticton, Cam and Dana happened to be there as well, and the restauranteur happened to introduce us. They’d just been back from foraging, and had a van full of watercress and nettles destined for the dinner the following night for the Slow Food national delegates. Already had 2 shoots booked the following day, but couldn’t not slide by to visit them in between to interview them while they prepped.

Anybody, especially those in industry, that takes the leap into local producers and organics, makes their own charcuterie, does artisan baking, raise laying hens and hogs, and forages their greens for a posh dinner gig = super cool in my books. I have time for these kinds of folks, all day long.

The Okanagan food scene is changing. Fast. I spent a fair bit of time down there a few years back and loads of what I saw at the Slow Food conference – artisan bakers, cheese makers, foragers, etc – didn’t seem to be around back then. A lot of twenty-and-thirty-somethings are making a major dent in improving the burgeoning food scene, thank god for that. The wine scene seems to be maturing as well, with more consistently higher quality bottlings, and the price points to go with. Having just spent some time in Napa & Sonoma, I will bravely admit to vastly preferring the Okanagan. Wine critic extraordinaire Jancis Robinson once wrote something to the effect that the Okanagan is only behind New Zealand for most epicly beautiful wine region on planet Earth. Add a wicked food scene to that? Joy Road are in the pack making that perfect storm happen.