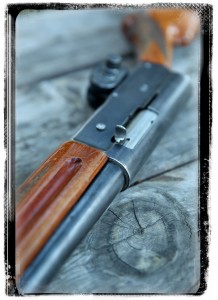 ‘Fabrique Nationale d’Armes de Guerre – Herstal – Belgique’. My uncle figured my grandfather had had it since at least the mid 50s. I suppose firearms made by military manufacturers would have been a lot more common back then, only a few years after WWII. My grandfather was an officer in that war. I have a painting of his that was extremely important to him, depicting the emotions he saw in the faces of the Dutch when he arrived in wake of immediate post-war clean-up duty. He passed away a few months ago, and my uncle thought that this long-loved 12 gauge shotgun should be put to good use by somebody in the family. I’ll do my best.

It was odd feeling immediately emotionally attached to an object, nevermind a firearm, that I’d never laid a hand on until I received it. It was the closest I’d been to my grandfather since he passed away, I suppose. He’d spent decades in fields and forests with it and his kids – my uncle sharing stories of its use on hunts back when his brother that has now long passed away was still around. It has a really long barrel, and apparently my grandfather could connect on sharptail grouse and ducks that others thought were out of reach. Stories. I look forward to the opportunity to compound the stories when in the field with my kids. One of the mighty valuable benefits of a tool well made.

6 Comments on “An Heirloom Tool”