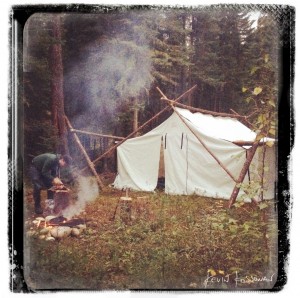 Hunting season had just started, and Hank Shaw was going to be arriving in a week or so. I had plans for our fledgling bushcamp prior to his arrival, the most important of which was getting a tent frame built out of the surrounding black spruce. I have an aluminum frame for the tent, but hauling it had proved to be onerous the season prior, and for a basecamp we were going to return to often in the coming months/year(s) a semi-permanent solution made more sense than hauling frame poles back and forth every trip.

Enter Allan Suddaby. I’d seen him just prior for the first time in a while, at an invite-only Austrian ‘most herurigen’ he holds to celebrate pig harvest and equally importantly the cider ferment, serving still-in-secondary ciders crushed days before paired with a myriad of Austrian charcuterie preparations. I’ve known Allan since his culinary school days, and felt silly realizing that of all the culinary folks I know around home, Allan is one of the most well versed in wild edibles – and I’ve never been hunting or fishing with the guy. Knee jerk was to ask if he had any interest in a hunting outing. His kneejerk was yes. 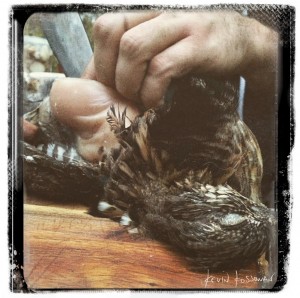 It was the second week of September, deer season wasn’t open, but grouse and small game was. The bush was wet from some fall rains, which meant the road into camp would have low spots muddy enough to get me out of the vehicle every time on the way in to walk it first, to make sure we wouldn’t be staying in the woods longer than intended. I learned something that day. Out of maybe 4 walks in the low spots on foot, twice I flushed ruffed grouse. They were hanging up in the wet spots, feeding on willows I’d later learn. This pattern would repeat itself through the fall. We ended up entering camp with grouse in hand. Dinner was sorted.

I put Allan on starting a fire, while I cut black spruce for the the tent poles. Long into my project, Allan was still at it. I decided to give him a hand, thinking it was him. Turns out it was the saturated forest. Took  some splitting of standing dead trees to get to the dry centers in order to make progress, which still was not easy or fast. Note to self: leave a water-sealed cache of fire start in the bush.

With tent up, I got to learn something new again at dinner time. Allan was on dinner, and cooked possibly the best grouse I’ve ever eaten. Not because of flavour manipulation, but because of perfect execution on doneness. I’m guessing 95% of grouse I’ve eaten in the past has been overcooked, even if only a little bit, and the margin is thin on getting it wrong. Grouse should be juicy and stringy like a properly cooked chicken, otherwise you’re doing it wrong. I’d suggest starting hot, finishing slowly and carefully, and resting the meat prior to serving. We shared the campfire that night with some guests – Jeff Senger with Trevor and Trinity in tow from the meat shop. 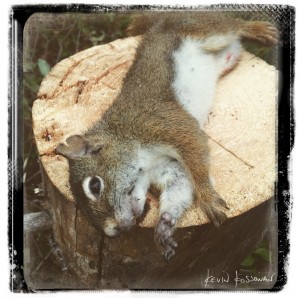 The next day, we looked for more grouse, but also were open to any small game, trying to ignore the whitetail doe standing on the cutline staring at me days before deer season. That day’s learning experience was the culinary merits of squirrel. I’d long wondered. Kevin Kent of Knifewear had sworn they were desirable. Here’s Allan’s post on the squirrel stew he made that day: http://buttonsoup.ca/squirrel/. Two more takeaways for me were Allan’s sourcing of dandelion and clover flowers for the stew – in the fall I generally forget about greens in the bush because we’re usually there a couple weeks later. Early season, greens and florals are game on. An even bigger one was Allan’s approach to the stew – he made a tea from labrador tea and rosehip for his cooking liquid in the stew. I’ve since used that technique many times in lieu of stock or water – using steeped bush teas as cooking liquid for things like wild rice, stews, braises, whole grains, etc. 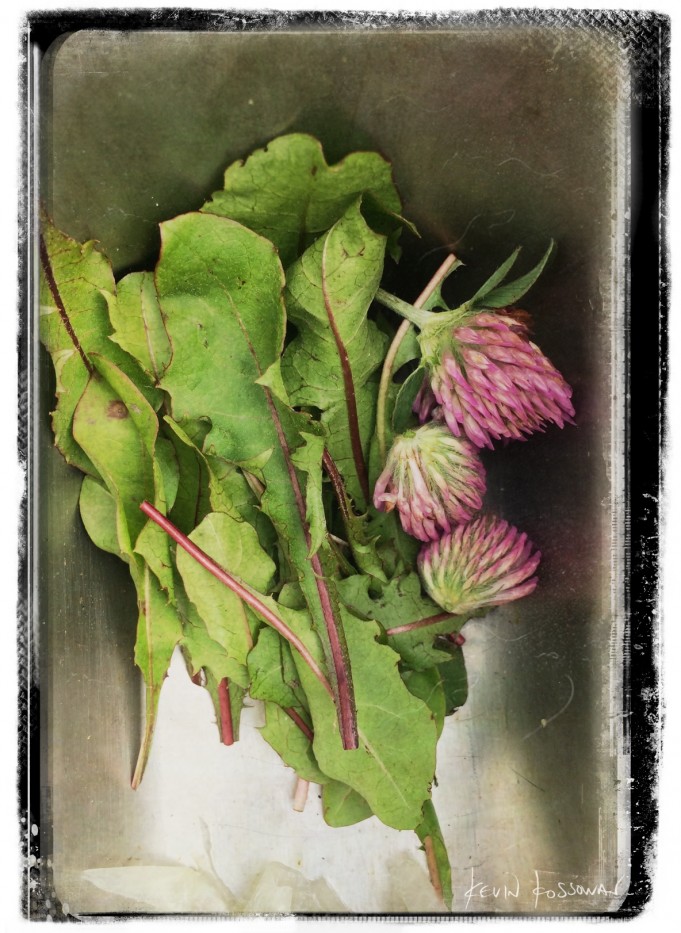 Maybe the most important takeaway is that a simple overnighter, without big game tags or cameras in hand, could yield so much learning. You’d think the learning would stop. Thankfully, it does not. 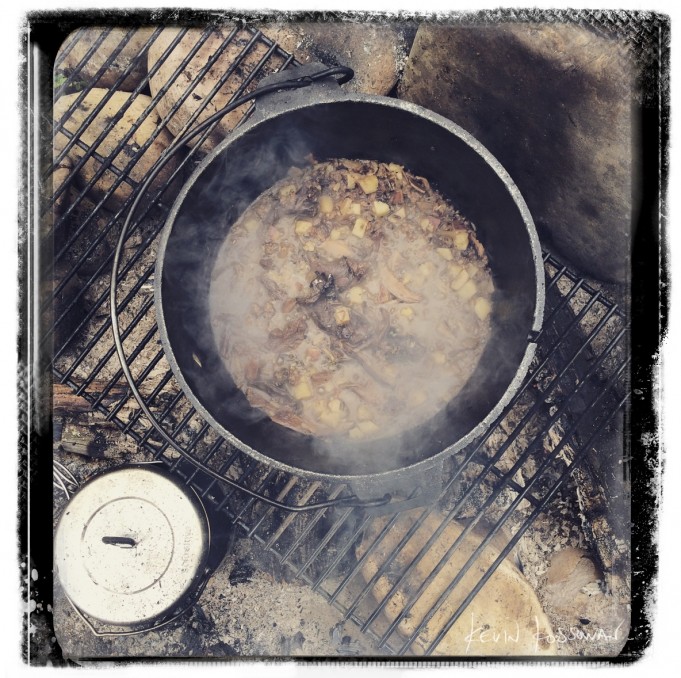