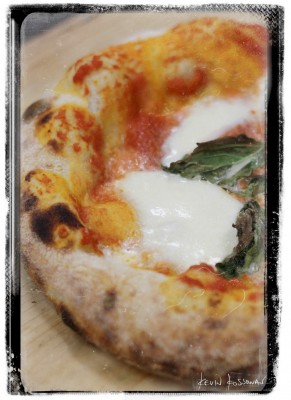 Two people passionate about pizza. Like. Hardcore passionate. New Level Pizza [no they don’t have a website, but you can follow them on Twitter @newlevelpizza], is affectionately known by members as ‘pizza club‘. Pizza club is currently a member only deal, not open to the public, and you can only go if you get invited by an existing member. There’s a long list of reasons why pizza club is a member-only deal at the moment, and you can ask the guys all about it when you score yourself an invite to go try their pies.

I have always adored the concept of prix-fixe eating – allowing the chef to do what inspires them and knock those dishes out of the park, rather than burning their energy accommodating everybody. Depending on the season and night, you’ll get a different array of deliciousness. Chad’s folks happened to have been in town from Newfoundland bearing gifts of line-caught cod, lingonberries, and cloudberries – so they ended up on the menu this particular night. Next time, something different.

It’s always fun to listen to folks talk about what they’re passionate about – and this episode’s no exception.