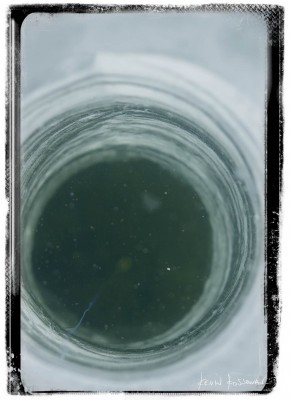 One day, a biologist will explain to me why it is that when ice fishing, the vast majority of your catch are females, or ‘hens’. As an example, the last day I had a bunch of perch in my kitchen sink, 9 out of 9 were female. So what, you ask? Well what this means to me is that I have a surplus of roe. I’ve been cooking it, mostly, then realized that perhaps I am missing the boat on converting it into something unique and special: caviar. As I’ve since learned, caviar is simply brined fish eggs. That’s pretty simple. Most recipes online [Hank’s got a nice post about caviar] were from trout or salmon roe. Perhaps freshwater fish roe would suck? Nope. I’ve had Golden Caviar [Whitefish caviar]. You can buy it commercially. I had to try it.

Turns out one of my favorite ice fishing spots is a mile or two away from Doef’s Greenhouses [Ep. 33]. I shot these two episodes in the same morning. A morning I will not soon forget, as I learned that hauling all my fishing camp gear and all of my camera gear for a km or two in deep snow is not a very good idea.

So I made up a 5% brine, threw it into my ice fishing bucket, and set out to give it a go.  I’d read that you should do it with super-fresh eggs. I can attest to the fact that they do deteriorate rapidly under refrigeration. Subsequent concept: go catch a fish with a DSLR on record, then kill and de-roe the fish right then and there on the ice. Can’t get much fresher than that. If you want to give this a go, you might want to read up on freezing freshwater fish prior to eating a raw preparation, so you can manage any bug-risks yourself. I’ve done my homework. So how was it? Watch the video.