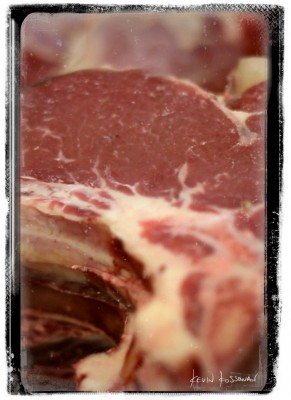 Pork workshop [Ep 50] went so well that there wasn’t much question about whether there would be more. This time around: beef. The kill was an old cow whose new destiny laid in Jeff Senger’s family’s freezer, while the cow we cut was a beauty of an organic cow from a local farmer. So the day: kill, skin & gut, break down into primals, cut into retail cuts, afternoon of charcuterie, followed by dinner and wine. Epic days, they are. And yes, we ate thinly sliced raw heart sandwiches for lunch.

Had lots of positive feedback about the pork butchery music track by the AwesomeHots, so this one features a shiny new track of theirs: Wayfaring Stranger. I love the vibe – really well tracked piece – and it gives this edit a somber side that made some of the gorier footage work in editing. If it’s too gory for you, blame Daniel Klein over at the Perennial Plate – he advised I go for it. Yeah, that’s a massive passing of the buck. Fact is, this is still tame relative to what goes down behind the scenes of a fast-food hamburger, say. Daniel’s work is extremely cool, btw, if you haven’t checked out his work, do. Here.

Just fyi, the trial of workshops this season was more successful than anticipated, but since my time doesn’t allow me to pursue it alone, I’ve teamed up with a bunch of rad people to start a company called Shovel and Fork. We’re essentially trying to do some good by offering folks a chance to engage with food in ways they wouldn’t normally get a crack at. These workshops will be a part of that. Should be a fun gig.