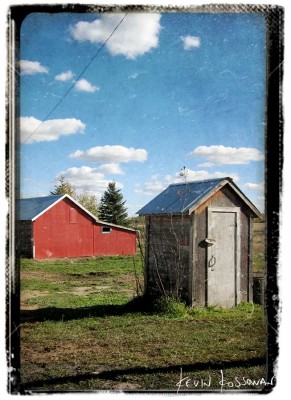 Used to be that fine goat cheese was something my wife and I would enjoy while traveling in France. Ten years later, as did the Smart car and Sephora, artisan goat cheese showed its face in Edmonton. When Smoky Valley Goat Cheese arrived at our City Market this spring, I wrote about it immediately. It changed our household food culture overnight, and since then our cheese has been hand crafted by Holly Gale.

As you may know, I’ve been on a bit of a crusade of sorts lately, doing what I can to help one of too many small artisan farm operations  struggling with viability. And yes, there’s a reason their new website looks shockingly like my blog, as I have recently been charged with re-creating their online face, asap.

I often wondered how Holly could make such good cheese right out of the gates, but now I know – she’s been making small-batch, farmstead cheese for over 30 years. In the video she discusses some of the challenges [everpresent in the regional farming gig], inspirations, and goals for their artisan dairy. Forgive the impromptu camera folly as the goats played with my tripod during the interview, and ate my list of questions for Holly. Ah, goats.