This is not a restaurant critique. Although I have some experience eating at nice places through Europe and at home, I’d say I’m in kintergarden when it comes to actual critiques. Nor is that the direction I want my blog to go. I cook at home, many times, every day. Need to source some kick ass food and wine in Paris to make a killer picnic lunch? I can help you out. I’m more that guy.

So while struggling to avoid critiquing, I want to give serious big props to Chef Kenny Kaechele and his crew in Calgary. On a recent food-centric tour of the city, guided by friend, chowhounder, and blog-commentor Yen, we stopped by Ei8ht for dinner. I had no idea what to expect. At all.

My first impression of Kenny is that he’s an intense, charismatic, self-confident guy. He strikes me as the kind of guy I’d be willing to fight to the death for if he were my commanding officer in war. Which likely has something to do with his successes in the restaurant business.

So what did we eat? 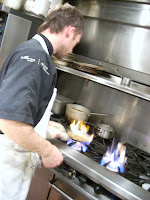 A highlight-reel is required, as ten courses with wine pairings is too endeavorous even for this food blogger. Two trendy items he redefined for me were pork belly and black cod. There’s a lot of fuss about those ingredients, but Kenny showed me why that is [not that I ever doubted the merits of pork belly]. The pork was stellar [the scallop it was paired with was equally fantastic], and the black cod was some of the nicest white-fleshed fish I’ve ever had. And I’ve had an awful lot of ridiculously fresh white-fleshed fishes.

His lamb creation for the evening was artistic and extremely delicious, and his salade nicoise-meets-lyonnaise was intelligent, luxurious, well executed, and just plain enjoyable. I’ve had a lot of salads in France which would be envious of this achievement.

The five dessert courses included clean & rich, chocolate & fruit, herbs & root veg, cake & ice cream, cookies & cream, and more. There’s some serious love being served up in that kitchen. And I have to be honest. I was really surprised to be so impressed. Nevermind in my own backyard.

I do have to say that my inner wine-geek would have preferred to have paired some of the courses with my personal collection. I feel his food deserves world-class wines, and with the high wine markups I’ve been known to hate on, I simply am unwilling to pay for top-end wines in a restaurant. I’d have been happy to pay corkage. Notice that’s not a diss on his food.

I also found that I’m simply not capable of surviving such a vast tasting menu. The portions were well engineered, but it was still a staggering amount of food. But that ain’t Kenny’s fault. He brought it. And I appreciate it.

Kenny’s a rock-star foodie in my books. He even looks the part. I don’t care where he’s cooking at or what he’s making – I would eat any dish he’s proud of. He has some serious chops. Some serious talent. And some serious experience. All of which combined to raise my expectations of how highly food can be elevated. If you find yourself in Calgary and are trying to find some fine food, find Kenny.

For more about Ei8ht and Kenny, here’s the restaurant’s website.

For a summary of the rest of our culinary adventures in Calgary, check out Yen’s chowhound post here.