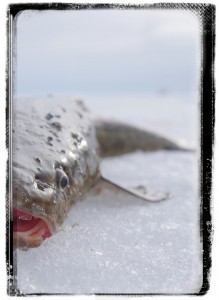 I’m sitting with the From The Wild crew, showing them some footage in the field. Keep in mind that over the years we’ve shown beef being decapitated on the kill floor, used a drone to film black bear being field dressed, got up close with a mule deer being field dressed after being arrowed in the guts, and a host of other ‘unpleasantries’. Unpleasantries that are the reality of killing animals in order to eat them. The intent has never been ’shock and awe’ – although it admittedly has that effect – the intent has been to close the loop on how we related to our food, if we’re going to be eating meat. To show field to plate, including the horrible moments required to get it there.

The scene I was showing the guys was of a burbot that some neighbouring fisherman had caught and put on the winter lake ice. Not bambi, but rather arguably the ugliest fish in our waters here. The issue was with how the fish died. Or rather, that while I was filming it, it hadn’t yet died. It was in the process of suffocating to death.

Sounds dramatic. We had this collective moment of realization that we’d never in a million years treat a pig, cow, deer, or any other animal intended to be eaten in that way. Suffocation over a period of many hours? Brutal. I’ve seen perch gills pumping a day or more after you’ve pulled them from the water. Do that to a lamb and you’d have an army of haters after you – the whole army. What happened to stress minimization, swift death, and humane animal handling systems?

All of us around that table had been beating the drum of well-raised, ethically killed meat for years, yet this issue of how fish die had never even crossed our minds. Not once.

So why is it acceptable for us to kill fish that way? And by ‘us’, I mostly mean ‘you’. At least when I’m catching the fish we eat, I bonk the fish on the head to at least attempt to kill them swiftly. I admit the odd time they survive it, but we try. Now I’m not a betting man, but will wager a guess that the majority of commercially caught species that you’ve purchased either for home or on a restaurant plate were netted, put into a hold, without the luxury of being dispatched any time soon, if at all. Suffocation. And/or evisceration? Maybe a little from column A, little from column B?

“and, a lot of people would say ‘it’s just a fish’ – but I’ll tell you one thing, working in the slaughter business there’s one thing that’s for certain – and that is an animal is not a vegetable.” – Jeff Senger [FTW S2E2]

I realize I’m not proposing a solution. And I’m not trying to place blame. Just asking a question: why do the mighty ethics we carefully apply to killing creatures from the land evaporate when it comes to creatures from the water? Completely illogical.

I’m grateful this simple fallacy finally became obvious to us, and that when we’re in the field we have the opportunity to make it right – to even out this ethical playing field.

Yes, the burbot footage did make it into S2E2 of From The Wild, along with a discussion around the issue. A critical reason we’ve kept FTW online and not on broadcast – they’d never touch this kind of content. You can watch the trailer for the episode below, or the full discussion and footage in question via the full episode: vimeo.com/ondemand/fromthewild.