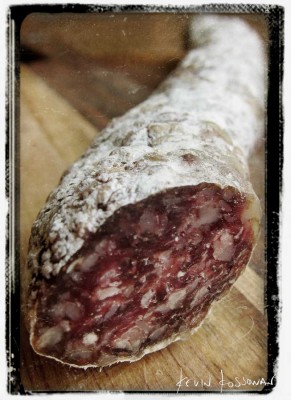 More learning as I go. Just checked previous posts to see when I made this batch of saucssion sec. 8 months ago today. I wasn’t sure how long this stuff would last, and apparently the answer is: ‘a really, really long time‘. I’ve wondered if one could indeed put up dry cured meats from fall-butchered animals and have them keep successfully without refrigeration or freezing until the next butchering season. Looks like the answer is yes. Perhaps even more exciting is that the quality has not deteriorated, and I even am going to suggest it has improved. I was satisfied with this batch, but not excited about it generally – likely the reason there’s still some hanging in the cellar. But it seems to have actually improved with age. Maybe I’m tasting satisfaction rather than reality.

I’m very pleased with the white molds that have become the norm in the cellar. And yes, mold can be very desirable indeed, despite how many people feel about it. Seems all mold has become synonymous with spoilage or ‘yuck’ in general – a 21st century misunderstanding. I don’t innoculate the meat with any culture, it’s simply the flora that decided to come hang out in my curing space. I’m still amazed at how some of these processes [fermenting being another one] seem so complex, exotic, and magical as a newbie retro-gastronomist [I’m coining that one, baby], yet are so natural, passive, and well…easy. I no longer wonder how our ancestors discovered fermentation or moldy charcuterie and cheese. Nature did its thing, and humans observed and went along for the ride. A tasty ride. 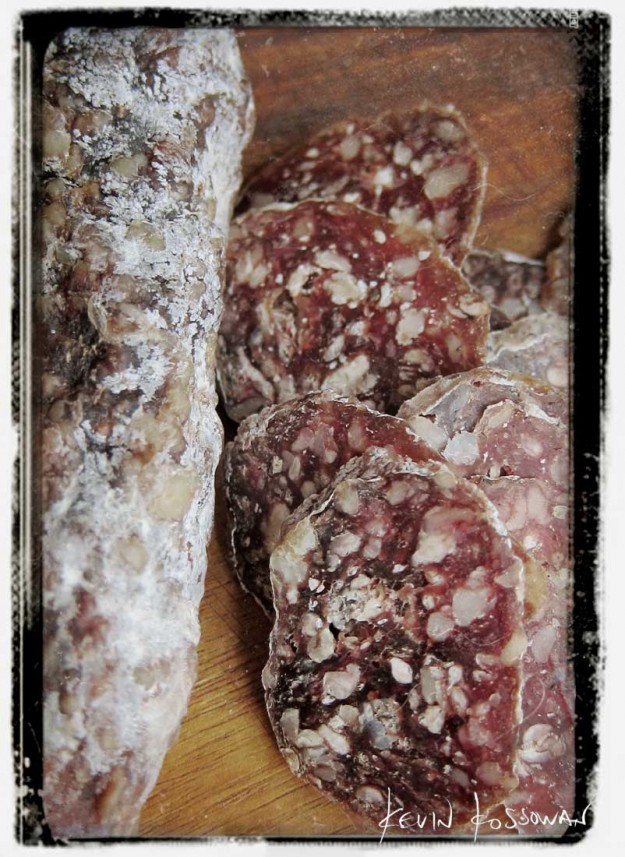