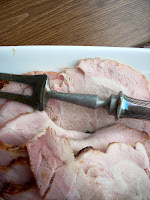 I basically avoid ham. One reason: despite the fact that ham you buy at a supergrocer is already cooked, people seem compelled to toss it in the oven or slow cooker a ridiculously long period of time. Longer than it would take to actually cook a ham, nevermind reheat it. To the point where you can peel strands of meat-dryness, more similar to jerky than to ham. Yuck. Best thing that happened to this incarnation of ham-hacking is mustard. Or the eager dog under the table, perhaps.

But my opinion on ham has changed. I took a pack of large ham [read: hind leg] roast from our recent pork-butchering-escapade and brined it according to Charcuterie’s brine ratios with the addition of garlic, rosemary, and bay. Brined it from 4pm til the next morning. Let it rest on a rack for most of that day. Then it went onto a rotisserie over a bed of hardwood charcoal coals for a couple hours, until my probe thermometer read 155F. Just prior, a glaze of honey, garlic, and mustard went on it. I should have taken a picture of that, as it was magnificent. But I didn’t.

It is the best ham I’ve had. There’s some room for improvement on brine concentration/penetration, etc as I had 2 issues: 1] the gradient of pink salt [long live pink salt btw] stopped prior to the center, which makes it look at tad funny, and 2] the extremeties are on the ‘too salty’ side, but when eaten with the rest is balanced in seasoning. Despite these flaws, best ham. No contest. I’d wager that if you could brine and cook your own hunk-of-any-cut-of-pork, even supergrocer quality pork, that you could exceed the crap you have had. So please. Do. Proper ham is bloody good.