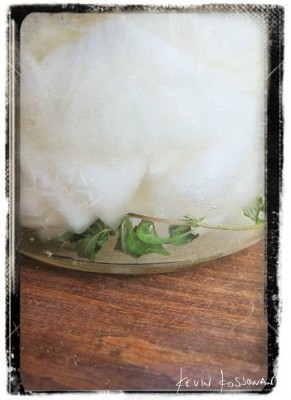 With a pretty heatlhy crop of onions in the garden – the best and biggest I’ll have grown, well, ever – my mind has started drifting towards pickled onions. I got the notion that I should start making these when they were the first bit I’d long for when tying into a jar of the pickled whitefish we made a while back. I’ve quick-pickled onions before, but have never played with putting up jars and jars of them. Not wanting to risk my garden crop, I decided to test recipes on walla wallas from the store first. Would be far less heart breaking if they sucked. Which they probably won’t.

After reviewing many, many recipes [and Hank, I tripped over your post while googling this], I came to the following conclusion. Most folks brined the onions in a fairly widely-opined ratio of 2 oz of salt per pint of water, for 24 hrs. They were then drained, and covered in vinegar that had somehow been flavored with aromatic spices and herbs. Easy enough. And explained why when I substituted garden onions last year in my pickled carrot recipe, it was a grand failure [far too dilute in vinegar]. No wasting garden onions this year.

This time around, I used white vinegar [I like the clean, perky acidity], wild thyme, and bay. We shall see.

One Comment on ““Pickled Onions with Wild Thyme & Bay””