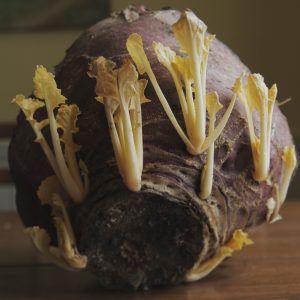 The rocky hills of Trondheim, Norway were under a foot of fresh snow, and I found myself on a biodynamic veg farm filming with the Cook It Raw Norway team. I’d filmed a lot of veg farms, but none this picturesque, and certainly never in winter. Pretty tough to find something interesting to talk about on a veg farm in winter that isn’t a greenhouse – unless you’re into root cellaring.

It wasn’t long into my interview with farmer Elin before we were talking about how vegetables evolve in texture and flavour through the winter, and most interestingly, about the gift that are the sprouts that roots produce. Shortly thereafter we were under her beautiful european farmhouse, exploring the contents of her cellar. Despite the snow outside, she had bins of root veg, sacks of potatoes, and even some soil with chard plants growing in the dark. Fascinating. I left inspired to explore shoots more at home. But it wasn’t over. Later in the trip we’d visit a couple  extremely well respected restaurants that would present me with an elegant dish featuring only a vegetable, using the shoots as an element on the plate that used the root, usually 2 or 3 different ways. It made so much sense it hurt, and the finesse they could apply to vegetables dishes was embarrassing.

This rutabaga is from my garden. I learned in Norway that 1] they call them ‘Swede’ and 2] they don’t let them get this big, because the texture gets compromised, they’re hard to work with, and they’re just not as nice. I shall defer to their expertise by default. So now, when something like this emerges from the cellar, rather than the shoots being discarded, they’ll be thoughtfully dressed or otherwise prepared, and go atop or aside whatever preparation the root is destined for – offering a different texture, flavour, and experience utilizing precisely the same plant. Perhaps most beautiful of all: whatever dish that might be speaks entirely of the late cellar season, something entirely not duplicable at other times of year. So exclusively pedestrian. I adore it. 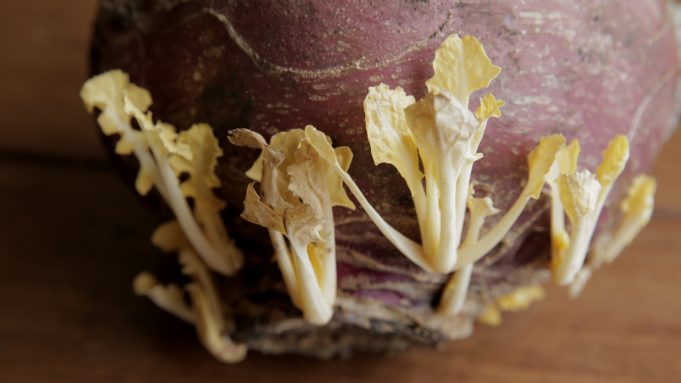 2 Comments on “The Root Cellar Garden”