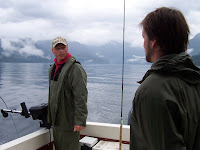 A little behind on my posts, I know. Yesterday morning Henry took us out salmon fishing. The day before, a 41 lb salmon, and a 56 lb salmon both came out of the same spot. When fishing is slow, this is a major deal. The big one was the biggest in the area since 1963. The highlight of the outing was getting our first chance to see orcas up close in the wild. A very memorable thing indeed. But no such luck for us on the salmon front, so we zipped across the channel and pulled up a bunch of rock cod to take home.
We then enjoyed a nice cockle chowder with a half crab for lunch, and proceeded to pack up to head back to Vancouver Island to catch our flight. Before heading to the flight, Hen and Gerry made up some excellent Hali-burgers. Halibut, mayo, garden lettuce, and sweet onion on a bun. Best Halibut I’ve had. The flight was fine, other than them not allowing me to take blackberry syrup, and some seafood stocks Gerry had given me – can’t have ‘liquids’ on the plane. You win some, you lose some.
But then things got shitty. We landed in Edmonton, and the airport was on ‘Red Alert’. There was such severe lightning striking the airport that they shut down all ground crews. So we sat in our plane, at midnight, for more than an hour, waiting to be able to get off the damn thing and go home. So we weren’t in bed until 2am. Which is bad news for this perm-cold I’ve had for the past month. I think I’d kick it if I got some decent sleep. Decent sleep. Yeah. Not likely gonna happen anytime soon. But I’ll try.
Overall, our trip was fantastic. We chilled. Visited. Drank all 9 bottles of wine I brought. Caught a whack of fish. Smoked some food. Dug up some wild chives. Drank some beer. Did some writing and recording. Ate crab, prawns, salmon, rock cod, ling cod, halibut – how can you go wrong? We hadn’t counted on bringing home fish, so our packed freezer is an excellent souvenir and added bonus.