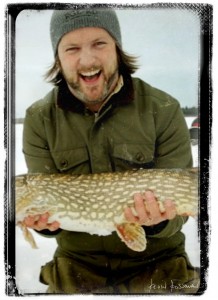 “the level of excitement when you catch a fish, that could only be measured against the incredible periods of boredom, and the immense amount of struggling – you’re battling the elements, and you’re suffering. Only through that suffering can you know the joy of when you actually get a fish up on the ice” – Jeff Senger, From The Wild, S1E1

What he said. Shooting at Spray lakes was epic and unforgettable despite the slow action, and thanks to a standing offer from my dad to go visit him at his place in Saskatchewan, episode two was equally memorable for different reasons – one being we caught piles of fish. The province of Saskatchewan has a vastly higher lake-to-fisherman ratio than Alberta, which means there’s more fish, and fewer folks after them. We headed off every morning on sleds through the bush to get to the larger nearby lake that regularly produces 20lb+ pike and donky-whopper perch [a term I’m stealing from Jeff, and that autocorrect wants to call ‘dinky whopper’]. I landed the biggest pike of my life to date hand bombing braided line in bare hands off a tip up. We pigged out on fresh fish and roe, and took photos of fish like it was 1972.